Podcasters knew last week would bring a dip in downloads with the Christmas holiday disrupting normal media habits. The only question was how big an impact there would be. Podtrac reports among publishers and podcasts it measures, overall downloads dropped 12% for the week of December 21-27 compared to the prior week. But illustrating how much growth strides the industry has had during the past year, Podtrac also says last week’s downloads were up 31% compared to the corresponding week a year ago. 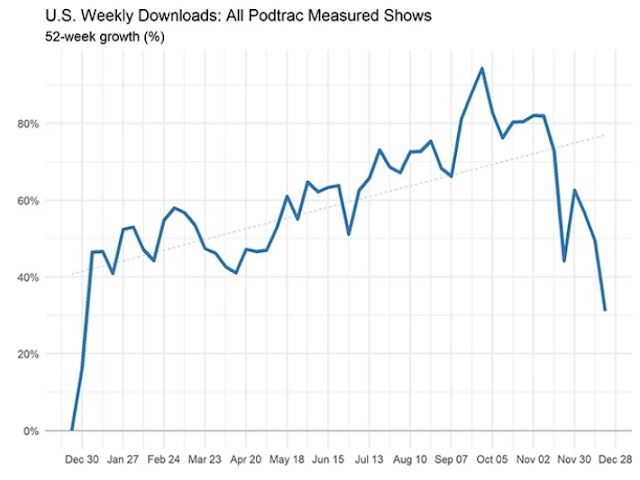 Despite a down week for downloads, the holiday week was not without growth among podcasting’s largest show categories. Podtrac says the History genre posted a ten percent week-to-week increase in downloads last week. The Education category was even with the week before, while True Crime just barely crossed into negative territory with a 1% decrease in downloads among podcasts in that genre.

Other were off by more. One of the biggest drops was for News podcasts as many Americans took a break from current events for Christmas. Podtrac says News downloads were off 18% last week compared to the prior week. But it was sports – which had a 20% drop in week-to-week downloads – that fell the most. Other declines were recorded for the Comedy and Business genres – both were down 10% – with Science (-8%), Arts (-7%), and Society and Culture (-5%) also in the red. However each genre was firmly in growth mode when compared to its download numbers a year ago.
Podtrac earlier reported the iHeartPodcast Network was the biggest podcast publisher in November. It was followed by NPR, the New York Times, Wondery, and ESPN/ABC.