ESPN Radio: Are You Ready For Some Football...?

ESPN’s postseason college football coverage reaches its peak with the exclusive presentation of the College Football Playoff, kicking off with the Semifinals on New Year’s Day, Friday, Jan. 1. The trio of College Football Playoff games will air on ESPN and ESPN Deportes, with alternate telecasts available across ESPN networks via ESPN’s MegaCast presentation. ESPN Radio will broadcast all three games. In addition, the rest of the New Year’s Six will also be live on ESPN and ESPN Radio.

New Year’s Day action starts with the Chick-fil-A Peach Bowl, as No. 9 Georgia and No. 8 Cincinnati go head to head in Mercedes-Benz Stadium. Mark Jones, Dvoracek and Kris Budden will team up for the TV call, while Dave O’Brien and Mike Golic Jr. will be on the headset for the ESPN Radio broadcast.

At 4 p.m., the College Football Playoff Semifinal at the Rose Bowl Game presented by Capital One will be live from Arlington, Texas, with a stacked slate of commentators announcing No. 1 Alabama vs. No. 4 Notre Dame. Sean McDonough, Todd Blackledge, Todd McShay and Allison Williams are set for the ESPN telecast, while the trio of Tessitore, Andre Ware and Rowe will be live on ESPN Radio.

At 8 p.m., the College Football Playoff Semifinal at the Allstate Sugar Bowl pits No. 2 Clemson and No. 3 Ohio State against one another under the lights of the Mercedes-Benz Superdome. ESPN’s lead Saturday Night Football crew of Chris Fowler, Kirk Herbstreit and Maria Taylor will be joined by Tom Rinaldi in New Orleans on ESPN, and Sean Kelley and Barrett Jones will team up for the ESPN Radio broadcast.

On Saturday, Jan. 2, the PlayStation Fiesta Bowl starts the action as No. 25 Oregon and No. 10 Iowa State kick off on ESPN. Dave Pasch, Mike Golic Sr. and Quint Kessenich will be on the ESPN call, with Marc Kestecher and Ben Hartsock announcing the action from Glendale on ESPN Radio. 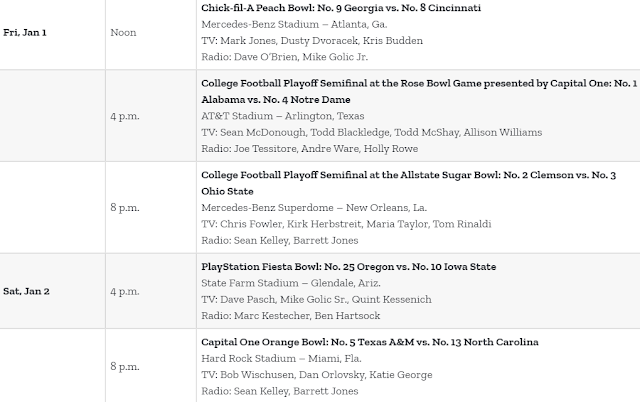 To close out New Year’s Six action, the Capital One Orange Bowl will host No. 5 Texas A&M and No. 13 North Carolina in Hard Rock Stadium. Bob Wischusen, Dan Orlovsky and Katie George are set for ESPN, with Kelley and Jones announcing their second New Year’s Six on ESPN Radio.