TV Ratings: Norah Has Yet To Move The Needle For CBS 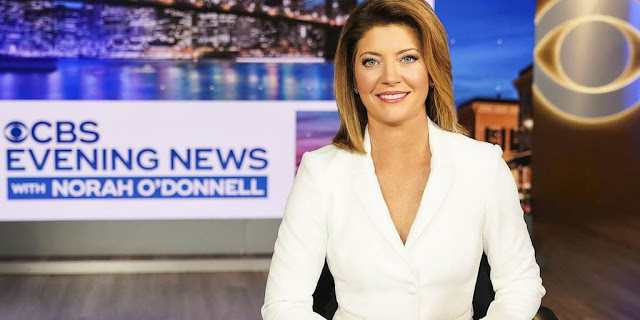 Norah O'Donnell, he former “CBS This Morning” host who is getting paid at least $7 million a year by CBS News boss Susan Zirinsky to revive the perennially third-ranked newscast — is getting hammered in the ratings worse than her predecessors did, reports The NY Post.

In the last week alone, O’Donnell’s total viewers plunged 17 percent to 5.1 million, according to Nielsen. Among viewers in the crucial demographic ages 25 to 54 that’s coveted by advertisers, the drop was a heart-stopping 25 percent.

The slide has steadily accelerated during the past month, with weekly ratings in the key age group falling between 20 and 29 percent versus a year ago. That’s far steeper than the single-digit drops during the year-and-a-half tenure of her predecessor Jeff Glor, who was pulling down $2 million a year, according to a source.

It’s a troubling sign for CBS, whose evening newscast has been stuck in third place since the tail end of Dan Rather’s tenure, which ended in controversy over his reporting about President George W. Bush’s military service.

Asked about the decline, CBS sent The NY Post a statement from Zirinsky, saying the network is “extremely pleased with how quickly the ‘CBS Evening News’ with Norah O’Donnell has established itself as a must-see destination for exclusive reporting and investigative journalism. We’re just getting started — ratings are not the sole measure at this time.”

To be sure, all three nightly newscasts have gotten slammed as viewers increasingly defect to the Web. In the 2018-19 season, ABC’s “World News Tonight” with David Muir came in first place, slipping 0.3 percent as it attracted 8.6 million viewers. On NBC “Nightly News,” Lester Holt’s total viewers fell 2.6 percent to 7.9 million, although he led the 25-to-54 group with 1.7 million.

But CBS’ dismal 2018-19 decline — in which its overall viewership sank 6 percent to 5.8 million through the middle of last month — has only worsened with the arrival of O’Donnell.

Nevertheless, critics say CBS executives have botched the transition, failing to launch O’Donnell’s tenure with a major publicity campaign or slogan. The network has pledged to move O’Donnell to Washington — the first time a major news network has anchored its broadcast outside New York since the 1970s. But the timing has been vague.
Posted 3:03:00 AM