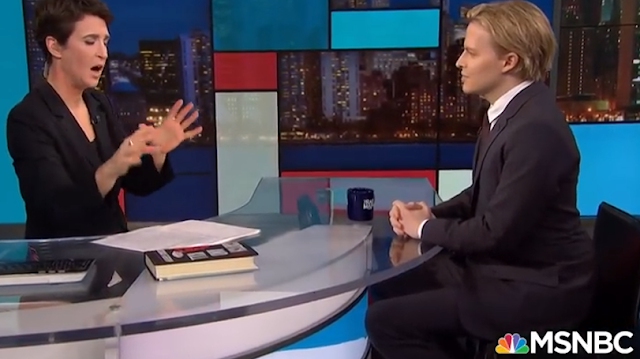 MSNBC anchor Rachel Maddow publicly confronted the leadership of her own network on Friday night, declaring live on air that she and other NBC News employees had deep concerns about whether the organization had stymied Ronan Farrow’s reporting on the movie mogul Harvey Weinstein. The NYTimes is reporting.

In a prime-time monologue, Maddow questioned why NBC News executives had not invited an independent investigation of the Weinstein episode or the workplace behavior of Matt Lauer, the former “Today” show anchor who was fired in 2017 after a colleague accused him of sexual misconduct.

“I’ve been through a lot of ups and downs in this company since I’ve been here,” Ms. Maddow said.

“It would be impossible for me to overstate the amount of consternation inside the building around this issue.”

Maddow interviewed Farrow on her show — itself a surprise booking considering her bosses have been at war with him since the publication of his new book, “Catch and Kill,” in which he asserts that NBC executives blocked his reporting on Weinstein’s brutal treatment of women.


Maddow — whose program is MSNBC’s No. 1 ratings draw — represents the biggest name in the NBC family to express misgivings over the network’s handling of Mr. Farrow’s reporting. Her on-air statements on Friday were likely to increase pressure on the NBC News leadership team, including the chairman, Andrew Lack, and the news division president, Noah Oppenheim, who have faced scrutiny from the press and inside network headquarters at 30 Rockefeller Plaza.
Posted 4:00:00 AM