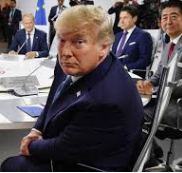 President Trump said Saturday that he will no longer host the G-7 Summit at his struggling Miami golf resort — but blamed the media and Democrats for his about-face rather than concern over an appearance of self-dealing.

Trump made the announcement in a trio of evening tweets, lashing out at his Democratic rivals and at press opposition to his holding the summit at Trump National Doral:


.....its own 50 to 70 unit building. Would set up better than other alternatives. I announced that I would be willing to do it at NO PROFIT or, if legally permissible, at ZERO COST to the USA. But, as usual, the Hostile Media & their Democrat Partners went CRAZY!
— Donald J. Trump (@realDonaldTrump) October 20, 2019


....Therefore, based on both Media & Democrat Crazed and Irrational Hostility, we will no longer consider Trump National Doral, Miami, as the Host Site for the G-7 in 2020. We will begin the search for another site, including the possibility of Camp David, immediately. Thank you!
— Donald J. Trump (@realDonaldTrump) October 20, 2019