➦In 1910...Kenneth Howard Delmar born in Boston (Died at age 73 - July 14, 1984, Stamford, Connecticut). He was an actor active in radio, films, and animation. An announcer on the pioneering radio news series The March of Time, he became a national radio sensation in 1945 as Senator Beauregard Claghorn on the running "Allen's Alley" sketch on The Fred Allen Show. 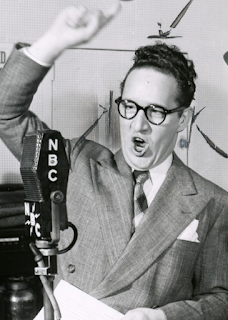 The character Delmar created was a primary inspiration for the Warner Bros. cartoon character Foghorn Leghorn.

By the late 1930s, Delmar was an announcer on such major radio series as The March of Time and Your Hit Parade. He played multiple roles in The Mercury Theatre on the Air's October 1938 radio drama The War of the Worlds.

Delmar is notable for creating the character Senator Beauregard Claghorn on Fred Allen's radio program Allen's Alley, which he did while also serving as the show's regular announcer. Senator Claghorn made his radio debut October 7, 1945, and six months later was called "unquestionably the most quoted man in the nation" by Life magazine. The role inspired the Warner Bros. animated character Foghorn Leghorn, first seen in the Oscar-nominated cartoon Walky Talky Hawky (1946).

"During the late 1940s, Mr. Delmar captivated 20 million radio listeners every Sunday night with his burlesque of a bombastic, super-chauvinistic legislator who drank only from Dixie cups and refused to drive through the Lincoln Tunnel," wrote The New York Times. "His stock expression, 'That's a joke, son,' was for many years one of the nation's pet phrases, mimicked by children and businessmen alike. 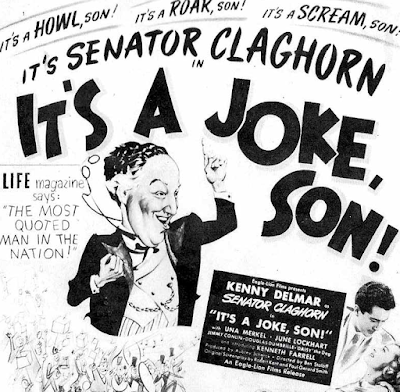 Delmar was also announcer and voice performer on The Alan Young Show in 1944. In 1953 he returned to radio replacing Hans Conried's character on My Friend Irma, as the Professor's cousin, Maestro Wanderkin and as Conried's Schultz on Life with Luigi.

➦In 1938…'Life Can Be Beautiful' began airing.  It was a daytime drama broadcast on NBC and CBS during its 16-year run. The program was billed as "an inspiring message of faith drawn from life" and remained one of the leading soap operas through the 1940s. Sponsored by Procter & Gamble and Spic and Span, it premiered September 5, 1938 on NBC and moved two months later to CBS, where it was heard from November 7, 1938 to June 21, 1946. Concurrently, it was also airing on NBC from 1939 to 1941. The final run was on NBC from 1946 to 1954.


➦In 1957...WPOW 1330 AM became one of the first NYC stations to air Rock & Roll regularly. Today the station airs a Spanish Christian music and teaching format and is owned by Radio Vision Cristiana Management.

➦In 1966...The Monkees released their first single--"Last Train to Clarksville".

➦In 1987...“American Bandstand,” hosted by Dick Clark on ABC, was cancelled after 30 years on network television, largely due to MTV's influence. The show limped along on the USA cable channel and in syndication for another three years, with a different host.

➦In 1989...Mike and the Mad Dog debuted on Emmis' WFAN 660 AM in NYC. The station was looking for hosts to repleace Pete Franklin during PM drive time and program director  Mark Mason, floated the idea of teaming Mike Francesa with Chris Russo. At first, the station management thought the idea was crazy because they were no-names at that time.  However, because of Francesa and Russo's popularity on the weekends and on Imus in the Morning individually, the station management decided to pair the two together.

The show aired WFAN from September 1989 to August 2008 and featured Francesa and Russo talking about sports and taking phone calls from listeners. From 2002 the show was simulcast on television on the YES Network. On the radio, the show was simulcast beginning 2007 on WQYK in Tampa, Florida and from 2004 until 2007 on WROW in Albany, New York.

➦In 2002...John Daly "Jackie" Kelk died at age 79 from a lung infection (Born - August 6, 1923). He was a stage, radio, film, and television actor and stand-up comedian. Kelk was best known for portraying the role of Homer Brown on the radio series The Aldrich Family and as the original voice of Jimmy Olsen on The Adventures of Superman.

In 2006, Elston was awarded the Ford C. Frick Award from the Baseball Hall of Fame. The award is given annually to a baseball announcer who has given major contributions to the game. Elston was healthy enough, at the age of 84, to accept the award in person at Cooperstown.