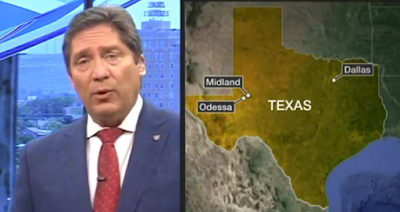 An Odessa news station had to evacuate in the middle of a broadcast Saturday during the horrific shooting in West Texas.

Jay Hendricks of local station KOSA-TV was on air and updating viewers about the shooting when he was told he needed to leave the set.

The KOSA studio is located in Music City Mall, where people were being evacuated.

“Uh oh, OK so we got to disappear,” Hendricks said on camera before stepping off the set. “Hang on. We’re gonna keep our mics on so we can get you up to date. We’re told to get out of here.”

Another anchor, Matthew Alvarez, witnessed people running and told Hendricks they needed to go, according to CNN. KOSA-TV is an affiliate of CNN.


Seven people were killed and at least 22 were injured when a gunman opened fire Saturday afternoon after being pulled over for not signaling while turning left, according to officials. He fled the scene after he began shooting and hijacked a U.S. Postal Service vehicle during a chase before being trapped in an Odessa movie theater’s parking lot, where he was killed.
Posted 1:14:00 AM