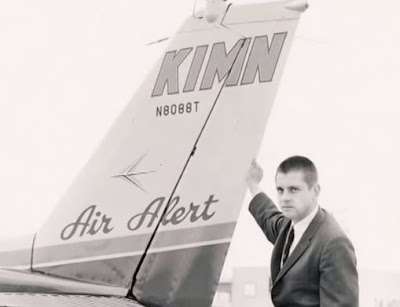 Don Martin, a pioneer in Denver radio news, both in the sky and in the news room, died Wednesday at Sky Ridge Medical Center.

Martin, who in 1960 became Denver’s first airborne traffic reporter, flying for KIMN Radio, also served as news director for the powerhouse station, building a state of the art newsroom which lead to a multitude of scoops and award-winning recognition.

Flying a fixed wing aircraft, a plane, not a helicopter, Martin took to the skies over Denver when Interstate 25 was known as the Valley Highway. In 1997, when Martin retired from radio after 37 years, he humbly, and humorously, recalled his early days as a flying traffic reporter. 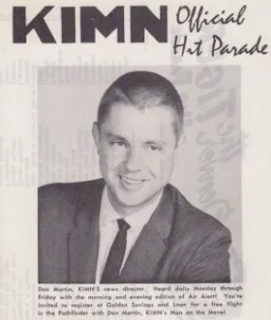 Martin had an early interest in radio, according to his daughter, Amy Martin. At the age of 14, officials with the FCC knocked on the front door of Martin’s parents house in south Denver.

They were there to shut down his pirate radio station, which he ran from his parents basement, Amy Martin said with a chuckle. Martin sold advertising spots around his radio program, to local businesses, in exchange for goods and services, his daughter said.

He also ran an advertising company, Don Martin Productions, recording commercials out of his home’s basement. An audio geek, Martin had surround sound and flashing, techno lights, installed in his home before they became popular. Former Broncos coach Dan Reeves and quarterback John Elway were among the folk Martin brought home as part business, and pleasure.

At the KIMN studios, by the late 1960s and into the early 1970s, Martin built an impressive newsroom with audio monitors for police, fire and other emergency broadcasts. Telephones in the newsroom had direct access to emergency responders as well. Pickup a phone and be connected directly to police headquarters.

Over the course of his career, Martin also flew and reported for KHOW, KTLN, KTLK, KPPL and KGMC among other stations.
Posted 4:04:00 AM