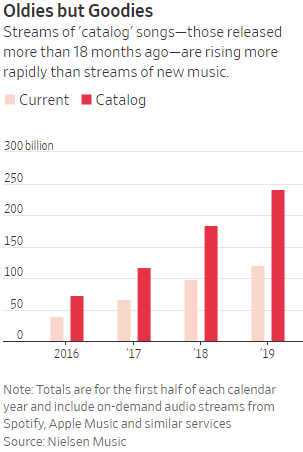 Older music is the biggest growth area in music streaming, according to Nielsen.

The Wall Street Journal reports labels are looking to cash in on “catalog” tunes—officially, songs released more than 18 months ago—both from veteran artists and more recent acts whose earlier hits still have traction, while the streaming services are tapping nostalgia to broaden their subscriber bases to include people more interested in Led Zeppelin than in Billie Eilish.

Over the past 10 months, major services including Spotify Technologym Alphabet Inc.’s YouTube and Amazon have created “head of catalog” executive roles, charged with promoting older music in ways that engage listeners of all ages. Apple Music has had such a position for several years, as has Sirius XM Holdings’s Pandora, which has been expanding its catalog team.

Music companies say they are now able to pitch older music for some of Spotify’s popular mood and genre playlists. The “Summer Road Trip” list, for instance, recently included songs from 1970s-born bands the Cure and the Doobie Brothers alongside more recent hits from Lil Nas X and Meduza. “The Cookout” list mingles recent hits by Childish Gambino and Drake with oldies from Bill Withers and Kool & the Gang.

Streaming is more tilted toward catalog than sales have ever been, according to Nielsen Music analyst David Bakula. Retailers—both online and physical—have tended to display new material front and center, and sales of tracks and albums historically have been around half catalog and half new music.