➦In 1896...Amanda Randolph born (Died from a stroke at age 70  – August 24, 1967).  She was the first African-American performer to star in a regularly scheduled network television show, appearing in DuMont's The Laytons.

She is best remembered as Kingfish’s mother-in-law in Amos & Andy, both radio & TV. In the late 1930’s she had been featured on the radio soaps Young Dr. Malone, Romance of Helen Trent and Big Sister.  She was one of several actresses to play Beulah on TV, and was a cast member on The Danny Thomas Show.

In 1933, Allen joined the cast of NBC's One Man's Family as Beth Holly, followed by roles on Death Valley Days, I Love a Mystery and other radio series. According to Allen, her Vera Vague character was “sort of a frustrated female, dumb, always ambitious and overzealous… a spouting Bureau of Misinformation.”

After Vera was introduced in 1939 on NBC Matinee, she became a regular with Bob Hope beginning in 1941. In the early 1940s, she was a regular on Signal Carnival, a weekly program on NBC-Pacific Red stations.

Allen appeared in at least 60 movies and TV series between 1938 and 1963, often credited as Vera Vague rather than her own name.

➦In 1931...Crosby made his solo radio debut on the radio show, "15 Minutes with Bing Crosby", on CBS Radio Network. 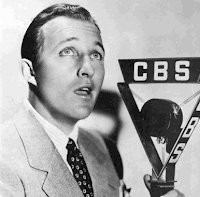 In 1923, Crosby had been invited to join a new band composed of high school students a few years younger than himself. Al Rinker, Miles Rinker, James Heaton, Claire Pritchard and Robert Pritchard, along with drummer Crosby, formed the Musicaladers, who performed at dances both for high school students and club-goers. The group did perform on Spokane radio station KHQ, but disbanded after two years.

By 1925, Crosby had formed a vocal duo with partner Al Rinker, brother of singer Mildred Bailey. Bailey introduced Rinker and Crosby to Paul Whiteman, who was at that time America's most famous bandleader. Hired for $150 a week in 1926, they made their debut on December 6 at the Tivoli Theatre in Chicago. Their first recording was "I've Got The Girl", with Don Clark's Orchestra, but the Columbia-issued record did them no vocal favors, as it was inadvertently recorded at a speed slower than it should have been, which increased the singers' pitch when played at 78 rpm. Throughout his career, Crosby often credited Mildred Bailey for getting him his first important job in the entertainment business.

Crosby soon became the star attraction of the Rhythm Boys, and in 1928 he had his first number one hit with the Whiteman orchestra, a jazz-influenced rendition of "Ol' Man River".

However, Crosby's reported taste for alcohol and his growing dissatisfaction with Whiteman led to his quitting the Rhythm Boys to join the Gus Arnheim Orchestra.

During his time with Arnheim, the other two Rhythm Boys were increasingly pushed to the background as the emphasis was on Crosby. Harry Barris wrote several of Crosby's subsequent hits including "At Your Command", "I Surrender Dear", and "Wrap Your Troubles In Dreams". But the members of the band had a falling out and split, setting the stage for Crosby's solo career.

Before the end of 1931, he signed with both Brunswick Records and CBS Radio. Doing a weekly 15-minute radio broadcast, Crosby quickly became a huge hit.  His songs "Out of Nowhere", "Just One More Chance", "At Your Command" and "I Found a Million Dollar Baby (in a Five and Ten Cent Store)" were all among the best selling songs of 1931.

➦In 1963..."The CBS Evening News" became the first TV network to extend the 15-minutes newscast to 30-minutes. Walter Cronkite was anchor.  The program has been broadcast since July 1, 1941 as 'CBS Television News'. The competing Huntley-Brinkley Report on NBC expanded to 30 minutes exactly one week later on September 9, 1963.

➦In 1968...Music Directors at radio stations across the country received a new 45 from a new group called Creedence Clearwater Revival.  They didn't know much about them other than their first single was called "Suzie Q".  They played it, and the rest is history.

➦In 1974...Reunion released "Life is a Rock (But the Radio Rolled Me)". Many custom versions were made for Top40 stations across the country. WCFL 1000 AM in Chicago had one. Here is the version for crosstown rival WLS 890 AM...

The 103.5 signal became easy-listening WTFM in 1958, licensed to Lake Success, N.Y.  The transmitter later was moved to the Chrysler Building in New York City, boosting its signal coverage.  The easy listening format continued until 1978 when WTFM flipped to an adult contemporary format. 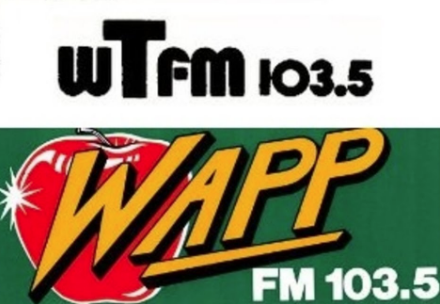 Doubleday Broadcasting purchased the station in 1982, renaming it WAPP-FM, and flipping to an album-oriented rock format.

Emmis Broadcasting purchased the station in 1986, flipping to a Dance format as WQHT-FM.  The change was a major ratings success.

Evergreen Media, which later was acquired by the company that became iHeartMedia, ended country music on 103.5 in 1996 and launched a dance-based format, renaming the station WKTU.
Posted 12:59:00 AM