Streaming Accounts For 80-Percent Of All Music Revenue 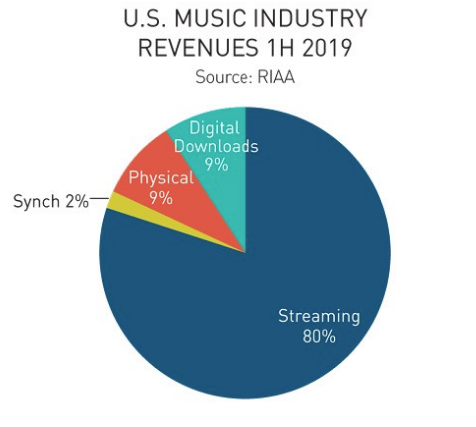 Music recorded retail revenues in the United States grew 18%, to $5.4 billion, in the first half of 2019, according to MusicRow citing the Recording Industry Association of America’s (RIAA) Mid-Year Report for 2019. In 2018, the U.S. music industry’s retail revenues had reached $4.6 billion.

That double-digit growth rate is driven by the number of paid streaming subscriptions totaling more than 60 million for the first time (up 30% from 2018)—this represents an average of more than 1 million new subscriptions per month over the past 12 months.

Streaming revenues alone grew 26% to $4.3 billion in the first half of this year (up from $3.4 billion in 2018), and includes revenues from subscription services, digital and customized radio services including those revenues distributed by SoundExchange, and ad-supported, on-demand streaming services. Paid subscriptions made up 62% of overall industry revenues and account for 77% of U.S. streaming music revenues for the first half of 2019. 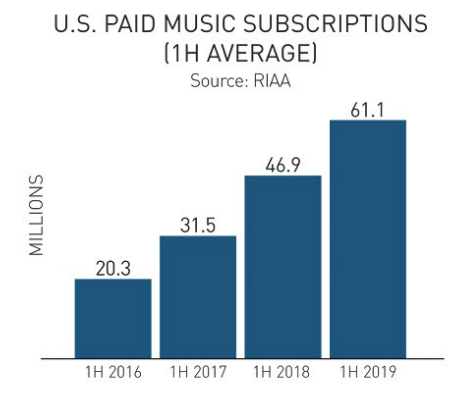 “This continued growth lets record companies do more than ever to discover, promote, and protect great artists,” RIAA’s Chairman and CEO Mitch Glazier said in a statement.

“Worldwide, labels now spend nearly $6 billion a year to find talent, enable artists to record, cut through the noise, and be heard. Finding and developing new talent is the lifeblood of the business, with 20% of a major label’s roster of artists signed fresh each year. 7 in 10 unsigned artists want a label deal to help them make it in an increasingly complicated and high-tech business.
Posted 2:25:00 AM