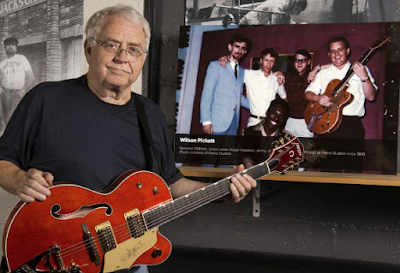 Jimmy Johnson, the guitarist for the Muscle Shoals Rhythm Section whose foundational R&B-based playing could be heard on hundreds of records, including iconic hits by Aretha Franklin, Paul Simon, Wilson Pickett and Lynyrd Skynyrd, has died.

He was 76-years-of-age according to Rolling Stone.  at the age of 76. “He is gone,” his son wrote on Facebook. “Playing music with the angels now.”

Growing up in the South in the 1950s, Johnson was drawn to the blooming sounds of rock, R&B and the electric blues. “I guess you’d say my inspiration was Chuck Berry,” he said in an interview earlier this year. “My parents always tried to get me to play country music and I just didn’t like it that much.”

Over the next decade, everyone from Paul Simon and Bob Dylan to Cher and Jimmy Cliff would record at the studio, using the Swampers as their backup band.

At Muscle Shoals Sound, Johnson also became an influential recording engineer, serving as the engineer for the Rolling Stones’ famous Sticky Fingers” sessions in 1969, which produced “Wild Horses,” “Brown Sugar” and “You Gotta Move.”
Posted 1:00:00 AM