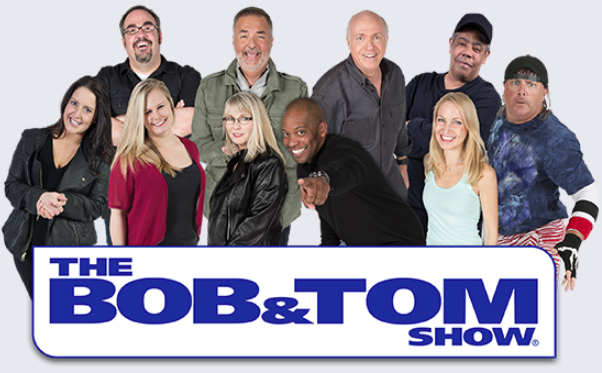 A favorite of millions and one of the funniest, longest-running and highest-rated radio programs in America, The BOB & TOM Show will air live on Chicago’s 101.1 WKQX-HD2 weekday mornings from 5am-10am. The popular show will broadcast with limited commercial interruption via a full metro market signal broadcasting from the top of the John Hancock Building. The nearly 1.8 million HD Radio-equipped cars in the Chicago DMA will make The BOB & TOM Show accessible for scores of people in the Chicagoland area who grew up listening to the legendary morning comedy show in markets across the Midwest and beyond.

Inducted into the National Radio Hall of Fame, The BOB & TOM Show airs live weekday mornings on more than 100 stations across the U.S. and on the American Forces Network worldwide. The BOB & TOM Show is exclusively distributed by Westwood One.

Marv Nyren, Vice President/Market Manager, Cumulus Chicago, said: “We are thrilled to bring The BOB & TOM Show to Chicago radio listeners through our 101.1 WKQX-HD2 station. 22.2% of the cars in the Chicago DMA are equipped with HD Radio – That means almost 5.9 million hours per week of in-car listening to stations using HD Radio side channels for programming that complements their primary signals. 101.1 WKQX-HD2 and The BOB & TOM Show add up to a lot more fun in the morning for Chicago comedy fans.”

Troy Hanson, Vice President, Operations, Cumulus Chicago, and 101 WKQX Program Director, said: “We are pleased to give a platform to one the most successful morning shows in radio history with The Bob & Tom Show on our HD2 signal at WKQX. Host Tom Griswold has put a remarkable on-air team together over the years to deliver some of the best content available on-air and online. A tip of the cap to Westwood One, who has made the access to the entire cast of B&T characters set to hit Chicago incredibly smooth.”

John Kesler, Chief Operating Officer, The BOB & TOM Show, said: “It is a big step forward for us to have a full market signal in Chicago. There are potentially hundreds of thousands of BOB & TOM fans in the Chicago area. Many of these fans were transplanted from markets where The BOB & TOM Show has been in syndication for years… places like Peoria, Madison, Rockford, Quad Cities, Indianapolis, Green Bay, and South Bend. We’re so pleased to be able to bring the show to them through our partnership with Cumulus Chicago and their innovative use of HD Radio technology, which is quickly reaching critical mass in cars.”

Tom Griswold, Host, The BOB & TOM Show, said: “American radio has always been led by what’s on the air in Chicago. We’re thrilled to be part of the mix.”
Posted 9:29:00 AM