➦In 1918...Paul Harvey Aurandt born (Died at age 90– February 28, 2009). Best  known as Paul Harvey he was a radio broadcaster for ABC Radio Networks. He broadcast News and Comment on weekday mornings and mid-days and at noon on Saturdays, as well as his famous The Rest of the Story segments. From 1952 through 2008, his programs reached as many as 24 million people a week. Paul Harvey News was carried on 1,200 radio stations, 400 American Forces Network stations, and 300 newspapers.

Harvey was born in Tulsa, Oklahoma, the son of a policeman who was killed by robbers in 1921. He made radio receivers as a young boy, and he attended Tulsa Central High School where teacher Isabelle Ronan was "impressed by his voice". On her recommendation, he started working at KVOO in Tulsa in 1933 helping to clean up when he was 14. He eventually was allowed to fill in on the air, reading commercials and the news.

He continued working at KVOO while attending the University of Tulsa, first as an announcer and later as a program director. He spent three years as a station manager for KFBI AM, now known as KFDI, a radio station that once had studios in Salina, Kansas. From there, he moved to a newscasting job at KOMA in Oklahoma City, and then to KXOK in St. Louis in 1938.

Harvey then moved to Chicago, where in June 1944, he began broadcasting from the ABC affiliate WENR (now WLS-AM). In 1945, he began hosting the postwar employment program Jobs for G.I. Joe on WENR. Harvey added The Rest of the Story as a tagline to in-depth feature stories in 1946. 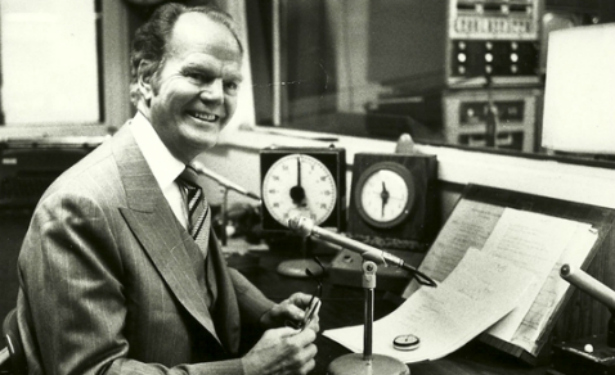 On April 1, 1951,  the ABC Radio Network debuted Paul Harvey News and Comment each weekday at 12 Noon". Harvey was also heard originally on Sundays; the first Sunday program was Harvey's introduction. Later, the Sunday program moved to Saturdays. The program continued until his death.

In the latter half of his career, Harvey was also known for the radio series The Rest of the Story, described as a blend of mystery and history, which premiered on May 10, 1976. The series quickly grew to six broadcasts a week, and continued until Harvey's death in 2009.

In November 2000, Harvey signed a 10-year, $100 million contract with ABC Radio Networks. A few months later, after damaging his vocal cords, he went off the air, but returned in August 2001.

His success with sponsors stemmed from the seamlessness with which he segued from his monologue into reading commercial messages. He explained his relationship with them, saying "I am fiercely loyal to those willing to put their money where my mouth is."


➦In 1961...The short-lived "Carol Burnett-Richard Hayes Show" premiered on CBS Radio. The series was a 20 minute musical variety show. Burnett was also a regular on "The Garry Moore Show" on CBS and singer Hayes had been on Arthur Godfrey's daily radio show.

➦In 1962...The Beatles entered EMI's Abbey Road studios for their first formal recording session, rehearsing "Love Me Do" and "Please Please Me."

.Blattner turned to broadcasting after his retirement as a player, teaming with Dizzy Dean on St. Louis Browns radio as well as nationally on the Liberty and Mutual networks, and on the televised baseball Game of the Week on ABC (1953–54) and CBS (1955–59).

Blattner was replaced on CBS by Pee Wee Reese following a dispute with Dean. He continued to broadcast baseball for the Cardinals (1960–61), Los Angeles/California Angels (1962–68), and Kansas City Royals (1969–75) as well as on NBC in 1969. He also called games for the St. Louis Hawks of the National Basketball Association in the '50s.

➦In 2014…Bruce Alexander Morton died (Born - October 28, 1930). He was TV news correspondent for both CBS News and CNN in a career which spanned over 40 years.

Morton was born in Norwalk, Connecticut but grew up in Chicago. Morton graduated from Harvard University in 1952 and spent the next three years in the U.S. Army. While still at Harvard, he was a newscaster for a Boston radio station. After leaving the service, Morton went into television news, first as a behind-the-scenes assistant at New York City's WRCA-TV, then on air for a local station in Pittsburgh.

He joined ABC News in 1962 as a London-based reporter. In 1964, he joined CBS News, where he would stay for the next 29 years. He was based in Washington, D.C., where he was a Congressional correspondent. During his tenure with CBS, he also co-anchored the CBS Morning News (with Hughes Rudd) from 1974 to 1977. Longtime CBS correspondent Roger Mudd, in his 2008 memoir The Place To Be, acknowledged Morton as the best writer in the CBS Washington Bureau during the years they worked together.

After leaving CBS in 1993, Morton went to work for CNN, where he stayed until his retirement in 2006. Continuing to be based in Washington, his title at CNN was national correspondent.
Posted 12:59:00 AM