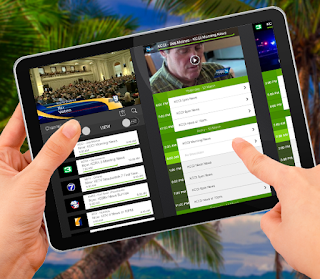 The free, advertising-supported NewsON service will be delivered through apps available for download from leading mobile and connected TV app stores.  NewsON will enable users to watch live and on-demand newscasts from their local markets or from any of the 112 participating news stations, in 84 viewing markets across the country, whose owners have already contracted to deliver their news streams through NewsON.  These include stations in eight of the Top 10 U.S. TV markets and 17 of the top 25.

Multiple stations will be available through NewsON in 21 markets, giving viewers the opportunity to “change channels” as they wish. The number of participating TV stations is expected to grow in the months ahead as additional broadcast TV station groups activate their streams into NewsON.

Leading this new venture is Louis Gump, who has signed on as NewsON’s Chief Executive Officer.

Accomplished in leading digital/mobile news services, Gump presided earlier in his career over benchmark-setting mobile businesses for The Weather Company and CNN, before becoming CEO of mobile media and advertising company LSN Mobile.  Gump has also served in various capacities within industry organizations including the Interactive Advertising Bureau (IAB) and Online Publishers Association (OPA), and he served for more than a decade on the board of the Mobile Marketing Association (MMA), where he held various leadership positions including Global Chairman and Treasurer. He was recognized with the MMA’s Lifetime Achievement Award in 2010.

He will be based in Atlanta where NewsON will scale up its organization.

“The sheer amount of live news coverage – from TV stations around the country – that has been assembled for delivery through NewsON’s apps is unprecedented,” Gump said.  “Americans place a great deal of trust in their local news teams, who are typically the first informers from the local scene of the biggest news developments around the country.  NewsON will bring instant access to live local news to a generation of viewers accustomed to using mobile and connected TV platforms to stay informed.

The NewsON service is expected to launch to the public in the fall of this year.
Posted 10:45:00 AM