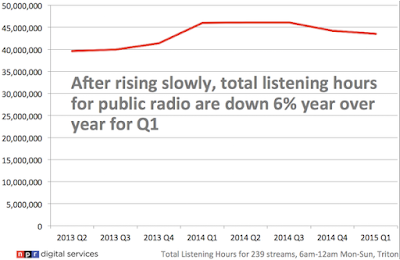 There are early indications that the digital listenership habits of the public radio audience are changing, as fewer people listen to live streaming audio and a growing number choose to tune in on demand, reports neimanlab.org.

Neiman cites total live streaming hours fell 6 percent in the first quarter of 2015 from the year prior, according to data from NPR Digital Services, which monitored 239 different public radio streams. Meanwhile, on-demand listening — which for NPR includes podcasts and individual segments that were initially broadcast on air — seems to be growing by a few different metrics, NPR said.

“This reflects the larger consumer trend that we see across all media, which is live consumption of any media, including television, shifting to on-demand, self-curated experiences,” Steve Mulder, NPR’s senior director of audience insights, told me in an interview at the NPR Digital Services office in Boston.

“People want to control the media they are consuming. They are able to in many other ways of their lives. Of course they’re going to want this when listening to audio as well. We saw this happening in music, of course, with the rise of the behemoth Pandora, and it only makes sense that we’re going to see this in news and talk listening as well.” 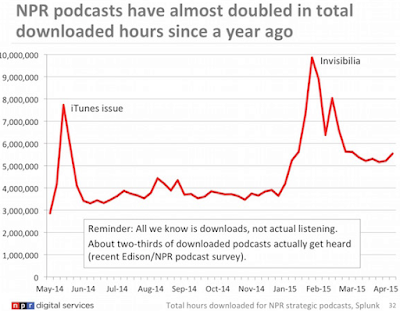 On-demand listening now accounts for one-third of all digital listening hours for station content, NPR said. On average, users download 40 minutes of audio each month, according to an NPR study of 161 member stations. In April, nearly 2 million hours of on-demand audio were downloaded from local stations.