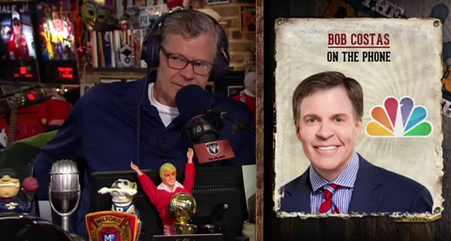 Add Bob Costas to those who aren't on board with Caitlyn Jenner being awarded the annual Arthur Ashe Courage Award at ESPN's awards show -- the ESPYs -- next month.

The legendary broadcaster and NBC Sports anchor said on The Dan Patrick Show earlier this week, "It strikes me that awarding the Arthur Ashe Award to Caitlyn Jenner is just a crass exploitation play -- it's a tabloid play. In the broad world of sports, I'm pretty sure they could've found someone -- and this is not anything against Caitlyn Jenner -- who was much closer, actively involved in sports, who would've been deserving of what that award represents. That's not to say it doesn't take some measure of personal courage to do what Caitlyn Jenner has done." Costas believes that ESPN chose Jenner for ratings, saying, "I think this is just a play to pump up [the] audience."

At the same time, Costas didn't have any ill will for Jenner, who as Bruce Jenner won the Olympic gold medal in 1976 for the decathlon, saying he wishes her well and believes we're, quote, "moving toward a more tolerant society."
Posted 3:17:00 AM