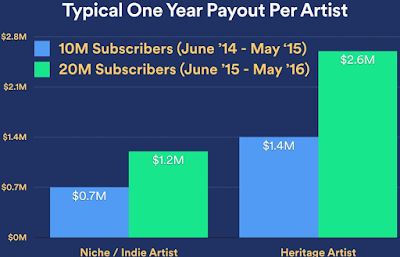 Music streaming service Spotify has upped its public numbers, announcing that it now has 75 million active users, with 20 million of them paying for its premium subscription tier, according to The Guardian.

That’s a rise from the previous figures – 60 million active users and 15 million subscribers – announced by the company in January. The announcement’s timing is no coincidence, coming days after Apple unveiled its rival Apple Music service.

The blog post also highlighted Spotify’s $3B of royalties paid out to music industry rightsholders, including $300M in the first quarter of 2015, and published some new claims of the payouts that artists of different sizes can expect to earn in a year from the streaming service.

According to Spotify, with 20 million subscribers, a “niche/indie artist” could expect to generate $1.2M a year in Spotify payouts, while a “heritage artist” would generate $2.6M. It also claimed that an artist in the company’s top 100 chart could get $3.3m, while a “global superstar” could generate $13.9M.
Posted 4:21:00 AM