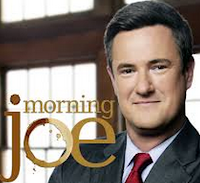 MSNBC host Joe Scarborough did not take kindly to comments CNN Worldwide President Jeff Zucker made about him in an interview with The Hollywood Reporter.

Scarborough sent a statement to Business Insider claiming the comments are evidence Zucker has an "obsession" with his show, "Morning Joe."

In the THR interview, Zucker dismissed an argument Scarborough made on Twitter that "influencers" prefer his show to CNN's "New Day," which has posted slightly higher ratings in recent months. He also hinted Scarborough may be out of a job soon.

"That's not how the game is played," Zucker said, adding, "And if that's what you're talking about, it's probably about time to start getting your resume ready."

Scarborough responded by predicting his show will beat CNN this year as it has in the past.

"Jeff’s continued obsession with 'Morning Joe' is fun to watch. More people have watched 'Morning Joe' than CNN for 5 straight years. As the political season heats up, I expect that winning streak to rise to 6," said Scarborough.
Posted 3:09:00 AM