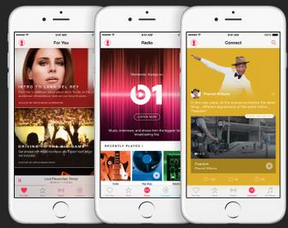 Apple officially introduced its new music streaming service, dubbed Apple Music, at its WorldWide Developer Conference (WWDC) in San Francisco Monday. The new service will cost $9.99 a month when it officially becomes available at the end of this month; Apple will also offer users a family plan for up to six family members for $14.99 a month, and give new users three months for free.

Variety reports Apple Music will be available in over 100 countries, and be accessible on iOS, Mac OS and Windows right away, as well as via a new Android app as well as an app on Apple TV later this fall.

Apple CEO Tim Cook was joined by music industry veteran and Beats Electronics co-founder Jimmy Iovine on stage. “In 2015, the music industry is a fragmented mess,” Iovine said. That’s why Apple intended to bring curated radio, personal collections, an on-demand catalog and interaction with artists all in one place.


The new service includes an on-demand streaming component, a curated radio service dubbed Beats One and a platform for artists to reach out to fans that Apple is calling Connect. Beats One is being dubbed at a worldwide radio station that is streaming live from studios in new York, Los Angeles and London, and can be accessed next to other radio stations within the new Apple Music app.

“The truth is, internet radio isn’t really radio,” said Apple SVP Eddy Cue when introducing Beats One. Instead, internet radio had been all about playlists. That’s why Beats One will use real on-air DJs, including former BBC One star DJ Zane Lowe, who got hired by Apple earlier this year.
Posted 3:43:00 PM