He was a British physicist and writer involved in the development of key patents in wireless telegraphy.


On 14 August 1894, at a meeting of the British Association for the Advancement of Science at Oxford University, Lodge gave a lecture on the work of Hertz (recently deceased).

There he conducted a demonstration of Hertzian (radio) based wireless telegraphy, transmitting messages between two buildings, showing their potential for communication.

This was one year before Marconi demonstrated his system for radio wireless telegraphy.


In 1947…After nine years as a 15-minute radio serial on WXYZ-Detroit, "Challenge of the Yukon" expanded to a 30-minute format and began its 11-year network run, eight years on radio – first on ABC, then on the Mutual Broadcasting System – followed by three years on CBS-TV, with episodes mostly filmed in Ashcroft, Colorado. In 1951, the show was re-named "Sergeant Preston of the Yukon."

In 1955…Monitor debuts on the NBC Radio Network. The weekend program "Monitor," the brainchild of NBC radio and television network president Sylvester "Pat" Weaver, began its 19½-year run on NBC Radio. The initial broadcast lasted eight hours. After an introduction by Weaver, news headlines from Dave Garroway and a routine by Bob and Ray, Garroway cued a music remote featuring live jazz by Howard Rumsey and the Lighthouse All-Stars at the Lighthouse Café in Hermosa Beach, California. 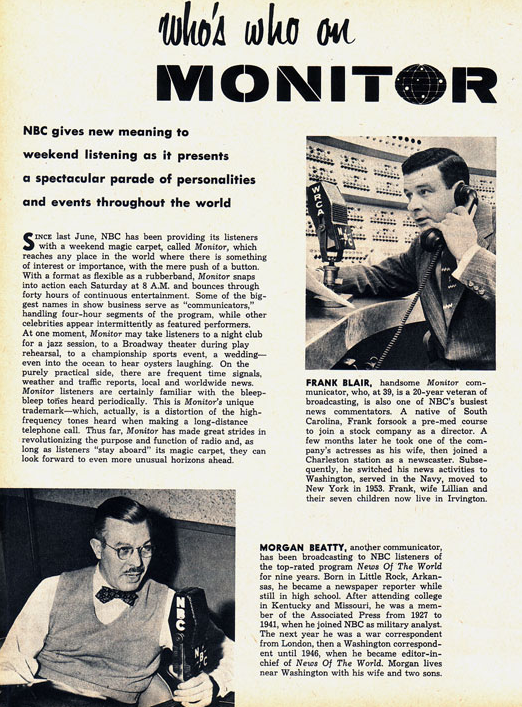 In 1989…Former disc jockey Vivian Carter, co-founder with Jimmy Bracken (later her husband) of Vee-Jay Records (the label name formed from their initials) died following a stroke and complications from diabetes at the age of 69. Vee-Jay was the largest black-owned label of the 1950s and over its 13-year lifespan had a talent roster that included the Spaniels, the Dells, Jimmy Reed, Rosie & The Originals, John Lee Hooker, Hank Ballard & The Midnighters, Betty Everett, Gene Chandler, Jerry Butler, the 4 Seasons and, briefly, the Beatles. Vee-Jay went bankrupt in 1966.

In Media Confidential One Year Ago...