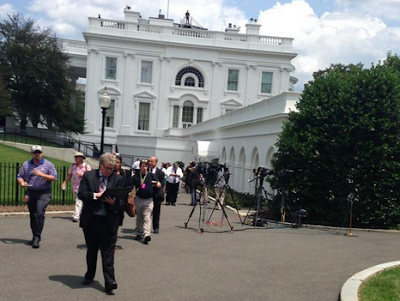 The White House daily televised briefing was interrupted Tuesday about 2:10 pm when reporters and staff were evacuated by the U.S. Secret Service due to a bomb threat made over the phone, according to TRNS. Reporters were led to the Eisenhower Executive Office Building. Spox Josh Earnest and his aides went to another section of the building.

Secret Service agents searched the room with bomb-sniffing dogs before reporters were allowed back into the room about 2.40. Earnest said President Obama, who was in the Oval Office, wasn't evacuated. First lady Michelle Obama and their two daughters were in the residence and weren't evacuated.

Secret Service agents interrupted the briefing as Earnest was answering a question about a recent online security breach at OPM, allegedly at the hands of Chinese hackers. "We need to evacuate the press briefing," a voice is heard saying. "Jesus!" exclaims a reporter.


During the Secret Service's search of the room, the TV network cameras - which were still streaming footage of the room - were covered up, according to correspondents. They're private property. Earnest said he didn't know who obscured the cameras.