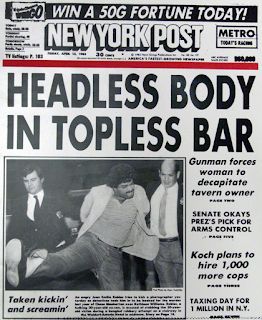 Musetto was diagnosed with pancreatic cancer three weeks ago. He passed away while in hospice care at Calvary Hospital in The Bronx with Claire, his wife of 50 years, by his side.

Musetto etched his place in New York journalism history when he wrote “Headless Body in Topless Bar,” the screaming front page ​headline​ of the​ April 15, 1983 ​ edition of ​ The Post.

Charles Dingle fatally shot the topless bar owner and then took four women hostage, raped one and had another cut off Cummings’ head.

In a 1987 interview with People magazine, Musetto – who began his career at The Post in 1973 – said the murder and decapitation was known early in the reporting process.
Posted 3:00:00 AM