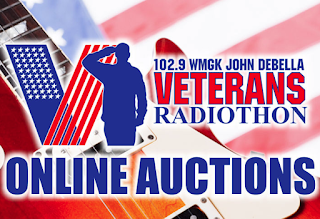 The auctions began Tuesday and end at various times on June 19. All funds raised will go to the Veterans Multi-Service Center(VMC) in Philadelphia. The VMC’s mission is to provide services, programs, opportunity and advancement to Veterans and their families.

This year’s Veterans Radiothon will take place on Friday, June 19 from 6a to 6p.  DeBella will broadcast live from outside of the National Constitution Center.  Throughout his broadcast he’ll encourage listeners to make call-in donations via 1800-678-WMGK(9645) or secure online donations via the station’s website.  He’ll be joined by famous musicians, celebrities, athletes during his broadcast.  Over the past eight years WMGK and John DeBella have raised nearly $750,000 for the VMC via the annual Veterans Radiothon.

DeBella’s dedication to veterans has been recognized by various organizations – the VMC has named an award after him and in 2012 he received the ‘Veteran Champion of the Year Award’ from the Philadelphia Small Business Association.

The VMC’s mission is to provide services, programs, opportunity and advancement to Veterans and their families.  Each year they serve 2,500 individual veterans, provide over 172,000 meals to homeless veterans, place over 300 veterans in jobs, and place over 500 veterans in housing.
Posted 3:01:00 AM