WNDE 1260 AM is back to all sports in the morning.

“It was more disjointed to our sports talk audience [than] what we were previously doing,” Green said of Rover’s Morning Glory. “In the morning, sports fans want to hear results from the prior night, and that’s what we lost.”

Green is confident this month’s change will lead to audience growth for WNDE during the important morning drive-time slot. 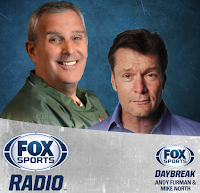 “I think the Fox Sports Brand is as strong as it has ever been,” Green said. “With the support of Fox Sports, I think the programming will excel and grow our ratings.”

In April in the men 25 to 54 demographic, WNDE’s Rover show registered a 0.0 share, which tied it for 32nd in the local market, according to Nielsen..

By comparison, Mike & Mike on WFNI scored an 8.5 share in April in the same demographic in central Indiana, according to Nielsen.

Green thinks WNDE will get another boost July 1 when it begins simulcasting on 97.5 FM. Also, the station will begin airing the Rush Limbaugh Show on July 6 from noon to 3 p.m.


Tom's Take: What really going on here is whatever WNDE was paying for Rover is now needed to pay for Rush, who is much more expensive.