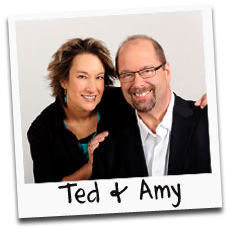 After a quarter of a century working side-by-side, most of the time before the sun comes up, Ted Long and Amy Robbins are still laughing. This month the pair celebrates 25 years as on-air partners on "Ted and Amy In The Morning" on radio station 93Q in .

"We are best friends," Robbins told cnycentral.com. "She is the planner. We used to have a producer, but Amy would wind up taking over and doing it her way, so that didn't work out," Long recalls of their many years together.

The pair started broadcasting together in November of 1988. At the time, Robbins was a recent graduate of . Long was already on the air doing the morning drive at 93Q. Robbins was initially hired to read the news as part of the show. Quickly, she was installed as the co-host. "We knew, I think, pretty early on that there was something about us together that just clicked. It really worked," Robbins said.

As for their long run on local radio, Ted Long believes he knows why it has worked for 25 years and counting. "We are local, we grew up here, we know what it means to be from , we know the people, and I think we know what they find funny," he said.