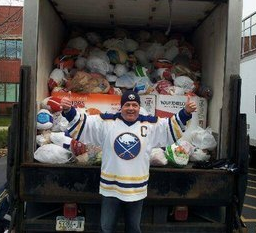 Buffalo Sabres fans are calling it "the best traffic jam ever" as they waited Thursday morning to drop off their turkey outside the WGR 550 AM Studios at 500 Corporate Parkway in Amherst.

The Buffalo Sabres teamed up with Entercom stations WGR, WBEN, KISS and STAR to collect turkeys for the City Mission Food Bank Thursday, handing out a pair of tickets to a future Sabres game in exchange for a turkey.

The line of vehicles with turkeys in hand stretched over 2 miles at one point with Sabres fans dropping off over 1,500 turkeys and the Sabres handing out more that 3000 tickets to future games.

The collection, originally scheduled between 7-9 Thursday morning, actually started well before 7am because of long lines of vehicles and continued well past 9am.
Posted 4:37:00 AM