Broadcast television networks now have two big allies in their fight against Aereo: the National Football League and Major League Baseball. The two sports leagues said Aereo could even cause them to stop airing games on free TV.

According To CNN Money, TV broadcasters want the Supreme Court to rule on the legality of Aereo, a startup that lets users stream or record live broadcast TV content for $8 a month. The NFL and MLB filed a legal brief to the court in support of the petition last week, as Variety first reported.

The NFL and MLB warned in their brief that if Aereo isn't shut down, they could be forced to air games on cable channels like Disney-owned ESPN or TNT -- instead of the free networks -- "where Aereo-like services cannot hijack and exploit their programming without authorization." 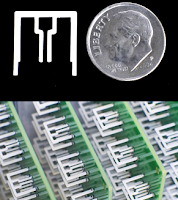 Aereo's lack of authorization from broadcasters -- and whether the startup legally needs that approval -- is at the heart of the controversy.

Aereo houses thousands of tiny antennas in its data centers. It assigns each customer a unique antenna -- which the startup says works just like a DVR and makes Aereo legal. Broadcasters say that's an unfair dodge, and that Aereo should have to pay them to retransmit their programming just like cable and satellite companies do.