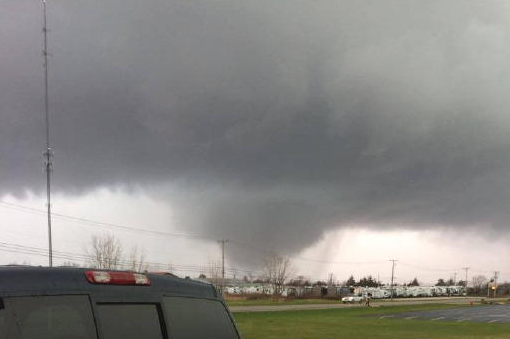 UPDATE 11/22/2013:  At 4:30pm Thursday, WYKT-FM was back on the public airwaves. For the time being, the station is transmitting thanks to the use of a rented diesel-powered generator. The transmitter is not a total loss.

The storms and tornadoes that ripped through central yesterday caused six deaths so far and untold amounts of dollars in damages.

According to CRM, the transmitter for far south suburban rock station WYKT-FM The Kat 105.5 FM was directly impacted by one of Sunday's massive tornadoes. The station has been knocked off the air because of it.

The tornado which knocked out The Kat's tower was an EF-2 with devastating wind speeds estimated at up to 122 mph.

WYKT-FM's transmitter is located a little east of . The  photo shows the tornado coming directly at the tower, seen on the left. Within minutes of being taken, that transmitter took a direct hit. The Kat 105.5 FM has been off the air ever since.

The station itself is still operational and can be streamed online at Kat1055.com, in the meantime.