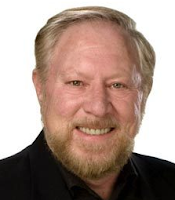 Although Ken Schram's Facebook page was lighting up with messages from fans — over 500 by 5 Wednesday afternoon — expressing their disappointment and anger that his commentary position at KOMO 4 News had been eliminated, there is a possibility he might return.

But, the Seattle Times reports,  Schram would have to be willing to become a part-timer, says Holly Gauntt, vice president of News-Fisher Communications and KOMO-TV news director.

Schram isn't exactly jumping at the opportunity to become what he says is basically a freelancer after his 35-year career there.

"I've got to digest everything that is going on," he says. "I'm not making any decisions until after Christmas. I've got an agent looking into other possibilities."

Schram had been doing an afternoon talk show on KOMO Radio, but the station ended talk shows in September and went strictly 24/7 news, weather and traffic.

Gauntt says Schram was a radio-station employee, although he had agreed to do his popular "Schrammies" and commentaries for the TV side.

Schram says his contract had been through December 2013, and is now being bought out.