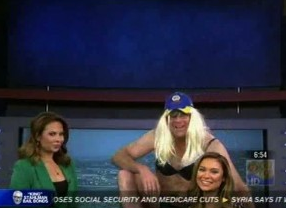 Despite a studio camera operator’s best effort, the San Diego CBS affiliate KFMB morning news Tuesday allowed a KFMB-FM morning personality to reveal a bit too much of himself on air.

According to Kevin Eck at mediabistro.com, while talking live with the JACK-FM “Dave, Shelly and Chainsaw” morning show Tuesday about the “’s Secret Fashion Show” also airing on CBS, KFMB co-anchors Nichelle Medina and Alicia Summers were given a sneak peek courtesy of the radio station.

“Allow me, Nichelle, Alicia, to present you with a preview,” said Dave Rickards who waited for the gag to begin.  The ‘preview’ was fellow DJ Chris Boyer who walked onto the KFMB set wearing only a black bikini.  “Wow!”  said Summers.  “What is happening right now?”

What was happening was Boyer’s bikini did not cover all of Chris Boyer.