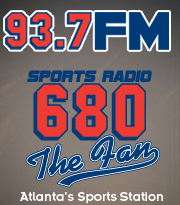 Oliver, part of the “Chuck and Chernoff Show” on 680 the Fan, told Joel Provano at ajc.com he used “awful, terrible, wretched, horrid judgment” in posing such a question after Georgia’s emotional 32-28 loss to Alabama, a game many are calling the greatest SEC championship game ever.

In the exchange at a post-game press conference, Oliver asked Richt: “There are some people, whether its fans, media or whomever else, that may want to make further conclusions about you or your quarterback specifically in big games. Would you have any response to those people?”

Richt: “I don’t know what you’re saying. Why don’t you just say it straight up what you’re trying to say.”

Oliver: “There will be people who say that you and Aaron Murray specifically come up short on the biggest stage against the biggest opponents. Do you have any response to that?”

Richt bluntly asked if it was Oliver who was saying that, and Oliver responded that’s what he hears on the radio every day. Richt then says, “That’s for you to worry about then — if that’s what you say then I’ll answer the question; if you think other people are saying that, I’m not worried about that.”