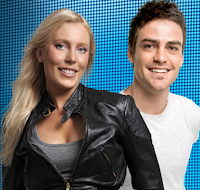 The Australian radio jocks who impersonated Queen Elizabeth II and Prince Charles on Tuesday will no longer be on the airwaves -- for now.

The news comes after a nurse who fell victim to the DJs' prank telephone call seeking information about the pregnant Duchess of Cambridge died in an apparent suicide.

According to cbsnews.com,the station released the following statement about radio personalities Mel Greig and Michael Christian:

"Southern Cross Austereo (SCA) and 2Day FM are deeply saddened by the tragic news of the death of nurse Jacintha Saldanha from King Edward VII's Hospital and we extend our deepest sympathies to her family and all that have been affected by this situation around the world.

Chief Executive Officer Rhys Holleran has spoken with the presenters, they are both deeply shocked and at this time we have agreed that they not comment about the circumstances. SCA and the hosts have decided that they will not return to their radio show until further notice out of respect for what can only be described as a tragedy."

Saldanha later transferred the call to the nurse caring for the duchess, who was admitted for acute morning sickness. That second nurse spoke freely about her 30-year-old patient, one of the world's most photographed women.