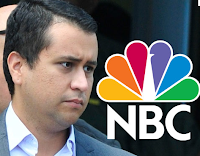 George Zimmerman, who's been charged with second-degree murder in the killing of Florida 17-year-old Trayvon Martin in Sanford, FL, filed a lawsuit Thursday (December 6th) against NBC, claiming he was defamed by the network when it edited tape of his 911 call to police, charging it made him sound racist.

Zimmerman, who's seeking an undisclosed amount of money, it also suing three reporters who covered the story for NBC or an NBC-owned TV station, all of whom were fired over the editing.

The complaint said the airing of the edited call inflicted emotional distress on Zimmerman, making him fear for his life and causing him to suffer nausea, insomnia and anxiety.

It charges NBC saw Martin's death, quote, "not as a tragedy, but as an opportunity to increase ratings, and so set about to create a myth that George Zimmerman was a racist and predatory villain."

The call as aired suggested that Zimmerman volunteered to police on a 911 call that Martin, who he was following in his gated community, thinking the teen might be looking to rob a home, was black.

Viewers heard, "This guy looks like he's up to no good. He looks black." Edited out had been part of the tape with the 911 dispatcher asking Zimmerman the race of the person ahead of him saying, "He looks black."

An NBC spokesperson said they strongly disagreed with the accusations, stating, "There was no intent to portray Mr. Zimmerman unfairly," and that they'd be fighting the lawsuit in court.
Posted 4:17:00 AM