Howard Stern has been around a long time, and he's still pissing people off as much as he did thirty years ago. 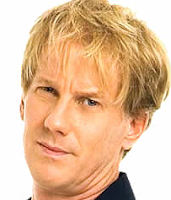 The latest evidence of Stern's inherent power of provocation came this week when his long time radio rival Greg "Opie" Hughes from "The Opie and Anthony Show" launched an all out Twitter war on the King of All Media without warning.

Hughes, who is also employed by Sirius XM, posted a series of tweets blaming Howard Stern for ruining Sirius XM stock, tanking the ratings for "'s Got Talent" and screwing over his writing staff.

Fact - @HowardStern hurt 's Got Talent and did not grow the audience. Rating were noticeably down.

in closing-philosophy of the company pay @HowardStern most of programing budget and the subscribers will come. Fell well short of this goal

and don't be stupid I don't fault @Howard for having a ridiculous contract. My point...IT DIDN'T COME CLOSE TO PAYING OFF FOR SIRIUS

Howard Stern to Return for Second Season as Judge on NBC's America’s Got Talent, Click Here
Posted 3:06:00 AM