Disappearing College Football Games Could Disrupt $1B In TV Ads 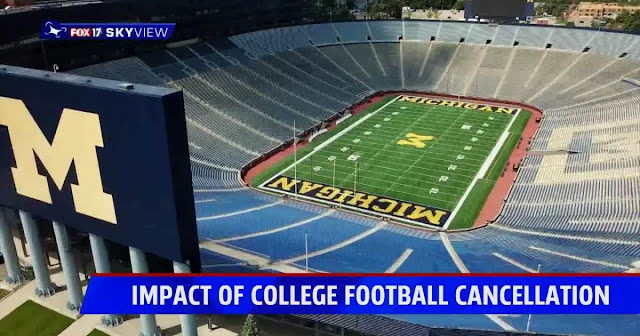 The postponement of much of the college football season could disrupt the flow of more than $1 billion from advertisers to the television networks that count on a slate of game broadcasts every fall, reports The NYTimes.

The return of the college game — a reliable ratings draw — might have helped the TV industry salvage a year of declining revenues resulting from pandemic-related cancellations and production delays. Now that the Big Ten and the Pacific-12 conferences, two of college football’s five powerhouse leagues, have pushed back their seasons amid concerns about the coronavirus, media companies are preparing for more pain.

Many players and school administrators, and even President Trump, had lobbied against the postponement, which could have financial ramifications for teams, campuses and local communities. The punting of the season will also affect the networks that have spent billions to secure broadcast rights, as well as the companies that had planned to spend millions to advertise their products.

“The implications are huge economically,” said Kevin Krim, the chief executive of EDO, a TV ad measurement platform that works with the networks and advertisers. “The cable and broadcast television ecosystem, with advertisers and rights fees and subscriber fees, are heavily anchored to live sports, and the most valuable franchises there are football.”

Last season, college football brought in nearly $1.7 billion in spending on television advertising, according to the research firm Kantar. Companies like Allstate, Chick-fil-A and State Farm each spent more than $30 million to advertise during games, while AT&T spent more than $70 million, Kantar found.

The Walt Disney Company and Fox are among the conglomerates likely to take a hit. More than 27.3 million people watched Louisiana State triumph over Clemson to win the national championship on Jan. 13, a game broadcast by the Disney-owned ESPN. It drew an estimated $91 million in advertising, according to EDO.
Posted 1:44:00 AM