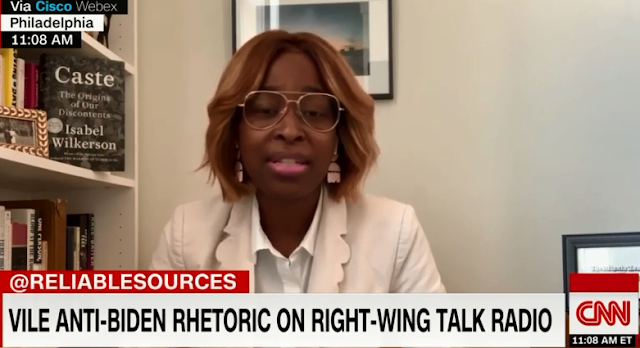 CNN guest Errin Haines claimed Sunday that there’s no network on the left dedicated to tearing down President Donald Trump, at least not in the way that right-wing radio shows attack former Vice President Joe Biden.

Stelter began by playing clips from several radio shows — including Rush Limbaugh, Michael Savage,  Mark Levin and Ben Shapiro — saying that Biden was “falling apart” or broadcasting “from a nursing home” rather than his own basement.

He then turned the question to Hemmer, asking, “Nicole, first to you, negative partisanship, it kind of explains everything about what is broken in our media environment because there’s all of these media outlet, all of these radio stars constantly attacking, fueling hatred of the other side. Am I right to say this happens on the left and the right but it’s more severe on the right currently?”

“Yes. I would say it’s more severe on the right currently,” Hemmer replied, saying that the right’s tradition of attacking from “overtly ideological media outlets” went back at least three decades.


Stelter then turned to Haines, asking whether she knew of any networks on the left that were as dedicated to destroying Trump. “When you see entire media companies essentially exist to tear down Joe Biden, is there an equivalent of that on the left, tearing down Trump?” he asked.

“There really isn’t. What I would say is it’s really a diet of this type of information that a lot of these voters are getting,” Haines replied. “A lot of the voters I talk to, I can — when I interview them, I do hear them saying a lot of the talking points that sound very familiar from some of these shows that I try to listen to when I’m out on the campaign trail or when I’m home, watching TV. You can hear these comments being echoed by voters.”
Posted 1:59:00 AM