Even if more Boiseans are working from home and not listening during a morning commute, plenty are still cranking up their radios, reports The Idaho Statesman.

Based on newly released ratings, tons are dialing to a specific FM frequency: KQBL 101.9 The Bull.

“Boise’s Best Country” dominated the “12-plus” category in the recently released Nielsen Audio ratings, which measure listener share twice a year in Boise. In spring 2020, The Bull earned a gigantic 8.7 share in 12-plus — people 12 and older tuned to radio between 6 a.m. and midnight. That’s the largest 12-plus number in this market in years. (How many years? Not sure. Going back through 2017, at least.)

The Bull’s win came by a country mile, too. The next-closest finishers? News-talk station KBOI-670 AM — more than 2 full points behind — and Boise State Public Radio (aka KBSX 91.5 FM), almost 4 points back. 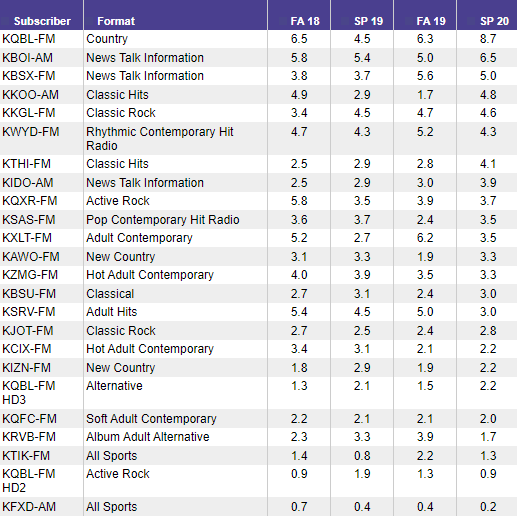 “There is no question about it. It was a weird book, given the pandemic,” said Darrell Calton, CEO of Iliad Media Group, which owns The Bull and six other Treasure Valley stations.

Country radio seems to be weathering the COVID storm fairly well, he said, based on conjecture and hourly analysis of the top two country finishers, The Bull and Wow 104.3 (which had a modest 3.3).

Certain other formats appear to be feeling some pain.

“Listening habits changed because of the commute,” Calton explained via email. “In our cluster, two of our biggest commuter stations and at work are KZMG (My 102.7) and KSRV (96.1 Bob). They were affected hard Monday through Friday.”

Unusual radio environment or not, this was the second straight ratings period that The Bull finished No. 1. It also won 12-plus in the fall 2019 Nielsen book.

As for morning shows this spring? The Bull was No. 1 there, too. The top three finishers in the 6 a.m. to 10 a.m. weekday time slot were locals “Mee in the Morning” (aka Kevin and Brenda Mee), followed by the syndicated “Bob & Tom Show” on 96.9 The Eagle, and “Morning Edition” on Boise State Public Radio, which is a blend of NPR programming, local host George Prentice and KBSX-FM’s news department.
Posted 2:05:00 AM