The Rundown: Top Doctor Warns Of Worst Autumn Ever

We could be looking at the worst autumn ever in the United States, according to Robert Redfield, director of the Centers for Disease Control. He means that coronavirus could still be raging when the flu season arrives. “We’re going to have COVID in the fall, and we’re going to have flu in the fall. And either one of those by themselves can stress certain hospital systems,” Dr. Redfield said in an interview at WebMD. Flu season usually begins in October and peaks in January and February.


There’s little likelihood of a COVID vaccine in that time frame. But there is a flu vaccine, and Redfield hopes 65 percent of Americans get it. The CDC has ordered extra doses so that uninsured adults can get it.

His advice on coronavirus is familiar by now: wear a mask in public, wash your hands often, keep a social distance, and avoid large gatherings.

No Deal for Coronavirus Relief: The Senate left town until September 8th today with no sign of a deal on the coronavirus relief package. It is possible but unlikely that the Senate could be called back earlier for a vote on the bill, according to The Hill. The matters left up in the air include higher unemployment payments for people thrown out of work by the coronavirus; another round of checks to taxpayers; money to help schools virus-proof their classrooms, and assistance for cash-strapped states and local governments.

Trump Wants Post Office Aid Cuts: One objectionable part of the coronavirus relief bill, to President Donald Trump, is a $3.5 billion grant to the U.S. Postal Service to help it handle the millions of mail-in ballots expected this November. He insisted, in a Fox News interview, that mail-in votes “will turn out to be fraudulent,” so he wants the funding to be cut from the bill. He said later that he would not veto the bill on that account.

Tracking the Pandemic: An additional 55,910 people tested positive for coronavirus yesterday, and 1,499 deaths were recorded, according to statistics compiled by Johns Hopkins. The number of positive infections since the pandemic began total 5,197,000.

➤ISRAEL AND UAE REACH HISTORIC AGREEMENT: Israel has agreed to temporarily suspend its plans to annex the West Bank as part of an agreement to establish normal diplomatic relations with the United Arab Emirates. The UAE is the third Arab nation, after Egypt and Jordan, to agree to a peaceful relationship with Israel. The agreement was announced by President Trump, who released a joint statement from leaders of all three nations. Israeli Prime Minister Benjamin Netanyahu characterized the agreement regarding the West Bank as “a temporary postponement” in response to a request from President Trump. “It is not removed from the table, I am telling you that.”

Watch: Ex-WH press secretary @AriFleischer rips mainstream media over treatment of Biden: “If he hides and they let him hide because they want him to win then of course he’ll get away it. That’s part of the double standard of the press today.” pic.twitter.com/U90Ob0l9uL
— TV News HQ (@TVNewsHQ) August 13, 2020

➤VOTERS APPROVE HARRIS CHOICE: Presidential candidate Joe Biden’s choice of U.S. Senator Kamala Harris as his running mate is proving to be a hit with the key demographic groups he’ll need to get elected. A flash poll conducted yesterday by Politico/Morning Consult finds that Democrats approved of Harris’ selection by a hefty 84 percent, and Black voters by 79 percent. Among independents, 44 percent approved compared to 27 percent who disapproved.

Fox News’ @JesseBWatters on cities violence: “Democrats are trying to captilise off the chaos because they think it will hurt President Trump but it’s not. It’s going to hurt them.” pic.twitter.com/1eUyFLj2tp
— TV News HQ (@TVNewsHQ) August 14, 2020 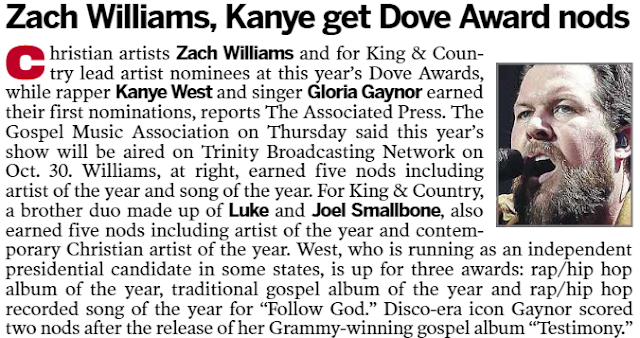 ➤LAWYER COHEN’S BOOK PREVIEWED: In the long list of tell-all books about Donald Trump, the one by his former lawyer Michael Cohen might stand out for the sheer number of epithets deployed in it. Trump, says Cohen, is “a cheat, a liar, a fraud, a bully, a racist, a predator, a con man.” And that’s just in the preview, posted in advance of next week’s release of “Disloyal: A Memoir.” The preview says Cohen will describe in detail how Trump colluded with the Russians to get elected. In other words, he says, the Mueller investigation “was not a witch-hunt.” Cohen was Trump’s personal lawyer for many years before being sent to prison for financial crimes and lying to Congress. He was released recently.

➤THEY DON’T CALL IT ‘DEATH VALLEY’ FOR NOTHING:  Dozens of American cities including Las Vegas, Tucson and Salt Lake City are expected to experience record high temperatures over the next few days starting today. But it’s really cooking in the aptly-named Death Valley, California. Temperatures there are expected to reach 126 degrees on Sunday and 127 on Monday. That’s a record for this late in the year. But wait, there’s more. Austin, Texas, has recorded 11 straight days of temperatures above 100 degrees, and at least five more are forecast before it breaks.

➤THE COST OF CANCELING COLLEGE FOOTBALL: The college football conferences that make up the Power 5 stand to lose $4 billion in combined revenue by canceling the 2020 season, according to a report from Washington University. And that estimate does not include broadcast revenue, conference payouts from bowl games and the playoff, corporate sponsorships or lost donations from fans. Daniel Roberts, editor-at-large of Yahoo Finance, says that hopes for a late start to the season are probably in vain, since that would force players to play two seasons in one year. They are students, after all.


Like the closings of schools, bars, restaurants and churches, the loss of college football — the rivalries, the tailgating, jammed stadiums and marching bands — feels for many Americans as if yet another piece of fabric was being torn from civic life.https://t.co/CEXlLsRC3C
— The New York Times (@nytimes) August 13, 2020


➤COLLEGE TOWNS WILL SUFFER, TOO: College towns are feeling the pain, too, from Pullman, Washington, where Washington State University is located, to State College, Pennsylvania, home of Penn State. College football towns are normally bursting at the seams with football fans on Saturdays through the fall. “What the hell are we going to do every Saturday this fall?” asks Marie Dymkoski, who runs Pullman’s visitor center. “I feel a little bit lost.”

➤RECORD DEAL FOR 49ERS KITTLE: All-Pro tight end George Kittle has scored a five-year, $75 million contract to stay with the San Francisco 49ers. The contract extension is the best deal ever for a tight end. Kittle missed two games last year and still led the team in catches, at 85, and receiving yards, at 1,053. The deal was first reported by the NFL Network.

➤SERENA DEFEATS VENUS, QUIETLY: Serena Williams prevailed over her sister Venus 6-3, 3-6, 6-4 in the second round of the Top Seed Open in Kentucky yesterday. It was the first official tournament in more than five months for both sisters due to coronavirus cancellations. They must have found it eerily quiet, too, since only a few friends and family members were allowed to watch the game.

➤ROBERT RYLAND DIES AT AGE 100: Robert Ryland, the player who broke the color barrier in professional tennis, has died at the age of 100. Ryland was a top player in the all-Black American Tennis Association before being invited to join the previously all-white World Pro Championships in 1959. He played competitively into his 80s and taught tennis at the Midtown Tennis Club in New York until 1990. His students included Arthur Ashe.