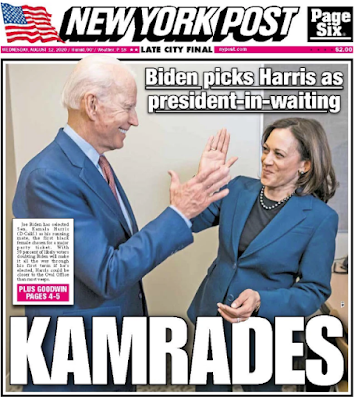 Former Vice President Joe Biden has chosen U.S. Senator Kamala Harris to be his running mate from an all-female list of frontrunners for the vice presidential slot. In these peculiar times, Biden made his announcement via email and tweet, calling his vice presidential pick “a fearless fighter for the little guy, and one of the country’s finest public servants.”

Harris, who is 55 years old, is a U.S. senator from California. She was twice elected the state’s attorney general. She had a reputation for being tough on crime as the state’s attorney general and, earlier, as a prosecutor. A daughter of two immigrants, her father is an emeritus professor at Berkeley who was born in Jamaica and her mother was a scientist who was born in India.

That makes Senator Harris the first Black woman and the first person of Asian descent to be named to a major national party’s ticket.


Asked for his reaction to Joe Biden’s vice presidential pick, President Donald Trump praised his own vice president, Mike Pence, and dissed Kamala Harris. He said she was “the meanest, the most horrible, the most disrespectful” senator present at the contention hearings into the nomination of Justice Brett Kavanagh to the U.S. Supreme Court.

➤NEW POLL SHOWS BIDEN WITH A 10-POINT LEAD: A Monmouth University poll released yesterday shows Democratic presidential hopeful Joe Biden leading President Donald Trump by 10 points. That shows some slippage from late June, when the former vice president had a 13-point lead in the same poll. The new results show him leading by a margin of 51% to 41%. President Trump’s unfavorable rating stands at 54% in the poll compared with 40% who say they have a favorable opinion of the president.

➤RECORD NUMBERS MAY VOTE BY MAIL THIS FALL: An estimated 76% of all American voters will be eligible to mail in their ballots in this fall’s presidential elections, according to The New York Times. A record number is expected to take advantage of that right, given the coronavirus. In fact, some states are taking step to make voting by mail easier this year because of the pandemic. Those measures include mailing ballots or ballot applications to all voters. President Trump vigorously opposes voting by mail because, he says, it facilitates election fraud.

➤TRUMP ADDS NEW HEALTH ADVISER TO TEAM: President Trump has named another expert to his team of advisers on the coronavirus. Dr. Scott Atlas is a healthcare policy expert at the conservative Hoover Institution, and his views are closer to the president’s than those of Dr. Anthony Fauci. In June, Atlas said that the idea that schools could not reopen this fall was “hysteria” and “ludicrous.” He also advocates the resumption of college football games. Early this week, Dr. Atlas told Fox News that “young people that age without a co-morbidity have virtually a zero risk from this.”

North Georgia Students Stuck in Quarantine: The Cherokee County School District opened its schools only last week but now 826 students have been ordered into quarantine due to possible exposure to the coronavirus. About 40 children have tested positive. The school district north of Atlanta has about 42,000 students in its elementary, middle and high schools. School officials recommended but did not require that students and teachers wear masks at school.

Dubious News from Russia: Russian President Vladimir Putin has announced that his country has developed the world’s first coronavirus vaccine and, he said, “it works effectively enough.” He said his own daughter had taken it. There is little to no chance that this vaccine will be approved for use outside Russia. It was not tested for safety or effectiveness in large-scale clinical trials, as is required for drugs approved in the U.S. and most other nations.


Some Twitter users poked fun at Smash Mouth, invoking the line "I ain't the sharpest tool in the shed" from their song "All Star" in response to the decision to perform at the large event. https://t.co/fwovqvz0C4
— NBC News (@NBCNews) August 12, 2020

Latest Statistics: Yesterday, there were 49,536 new cases of coronavirus identified in the U.S. and 525 deaths, according to statistics tracked by Johns Hopkins. Globally, only India had more new cases. The total number of cases in the U.S. since the start of the pandemic stands at 5,044,864. More than 163,000 have died.

➤BIG 10 MAKES IT OFFICIAL: Football’s Big Ten just made it official: Their 2020 games are postponed due to the ongoing coronavirus pandemic. The 14-team league hopes to play the postponed games in the spring. “The Big Ten will always put the mental and physical health and safety and wellness of our student-athletes at the center,” Commissioner Kevin Warren told the Big Ten Network. The move sidelines big names including Ohio State, Michigan, Penn State and Wisconsin. It also makes it more likely that few or no college football games will be played this fall.

➤PAC-12 CONFERENCE IS OFF, TOO: Hours after the Big Ten opted out, the Pac-12 Conference announced that it would postpone all sports competitions through the end of 2020. It hopes to return after January 1st. The decision was not unexpected. Half of the Pac-12 teams are in California or Arizona, which are particularly hard hit by the coronavirus. They include UCLA, Stanford, Berkeley and Arizona State.


As of last night, the Big 12 was reported to be “leaning towards trying to play” in the fall as usual. That's Baylor, Iowa State and Kansas State, among others.

➤NEWS FROM INSIDE THE BUBBLE: The NBA is sticking with tradition by naming an MVP even while it’s stuck inside a bubble. The league announced it will honor a Player of the Seeding Games. That’s basically an MVP for the eight games played at Walt Disney World. An All-Seeding Games Team also will be named. The winners will be selected by a panel of sports reporters and broadcasters who are on site in Florida. The final seeding games will be played on Friday, with playoffs scheduled to start Monday.

➤ASTROS COACH SUSPENDED: Houston Astros coach Alex Cintron has been slapped with a 20-game suspension for instigating a brawl between the Astros and the Oakland Athletics at Sunday’s game. Athletics outfielder Ramon Laureano was suspended for six games for his role in the melee. Cintron apologized for his role in the incident while continuing to deny that he ever made a reference, profane or otherwise, to Laureano’s mother.

➤DEION SANDERS TO LEAVE NFL NETWORK: Hall of Famer Deion Sanders will leave the NFL Network at the end of his current contract, according to multiple news reports. The immediate cause was a dispute over contract terms, but Sanders is said to be pursuing a new role as a college football coach. He has been with the network since 2006.
Posted 4:10:00 AM