Report: Advertisers Should Wise Up

Hip young ad buyers think of potential customers over 50 as clueless oldsters yelling for the sound to be turned up or baffled by any technology more recent than the typewriter.

Marketers spend only about 5% of their ad budgets on viewers over 50, according to the senior-marketing firm Coming of Age.

But, writes Kyle Smith at The NY Post,  here’s the rub: Americans 50 and up buy nearly half of all consumer packaged goods.

So why isn’t the advertising industry recognizing the importance of people over 50? How much longer can it continue to ignore empirical evidence and hard number crunching in favor of superstition, hunches and ill-informed prejudice?

According to Smith, to put it another way when will marketers realize that 55-year-olds whose houses are paid off and whose kids are out of college have a lot more money to spend than 25-year-olds staggering under the weight of their student loans and struggling to hold onto their McJobs?

Even if your hair is gray, your money is still green. 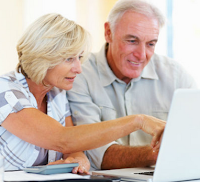 Compare the situation seniors are in to that of the fast-growing Latino market. No one would ignore such a lucrative group, much less offend them, right?

Seniors aged 65 and over are outnumbered by Latinos (by 10- million) — but they spend more. A lot more. Last year they spent nearly a trillion dollars more than Latinos. Online? Seniors spend more than $7 billion on the Web each year, and they make up more than a third of all social media users, Coming of Age reports. Some 39 million Americans 65 and older are using Facebook, Twitter and/or Skype.

Households headed by seniors have more than 20 times the net worth of those headed by those 35 and younger. That ratio has only grown over time: In 1984 that ratio was close to 10-to-1. Are they really worth only 5% of the advertising? And seniors are the only age group in which inflation-adjusted income has increased since the 2007 recession began.