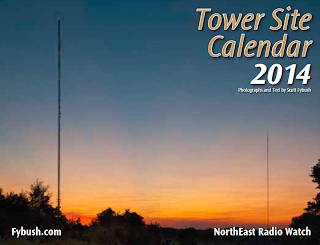 When one think of good photos for a calendar, you migh think of cheerleaders, dog of the month, kittens, Cape Cod shoreline shots.

But, according to writer Aaron Nicodemus at telegram.com, Scott Fybush, a radio journalist based in Rochester, N.Y., has been making a side living since 2001 printing a calendar chock-full of beautiful shots of ... radio and television towers.

It's a real business. In his best year, Fybush sold 1,000 calendars, to radio enthusiasts all over the world. He usually sells about 800.

Fybush has gone all over the country to find unique and different transmission towers to photograph.
Nicodemus says he's written many stories over the years about neighbors vehemently opposing the construction of towers in their backyards. But those are cell towers, Mr. Fybush argued, not AM transmission towers.

"To my eye, a lot of cellphone towers are really ugly," he said. "A lot of (cellphone) towers, they are just antennas slapped onto a metal pole. These towers, they have some grace to them."

He also argued that these towers add something to a neighborhood, not detract from it.
"When they're working in harmony with the neighborhood, they can provide open space in places that would otherwise be overrun with development," he said. "There's usually plenty of room around the towers; people can use that space as a kind of park. And there's no traffic. They are more than just a necessary evil."

Towers in the 2014 Tower Site Calendar include the former site of KBRT, an AM station that broadcast from California's Catalina Island until this year; the home of Chicago AM 1160's four-tower array in Des Plaines, Ill.; a master antenna system built in 1986 in Crestwood, Mo.; and the city of Tulsa, Okla.'s oldest surviving radio station, KFAQ, which launched Tulsa native and radio legend Paul Harvey.

You can order your very own 2014 Tower Site Calendar, with the WTAG site posing provocatively as Miss May, for friends and family for $18.95, plus $3.50 shipping and handling. Click Here.