Personality Dave Herman Gets His First Day In Court

UPDATE 11/27/2013 5PM:  Dave Herman appeared in federal court in Newark this afternoon, listening to the attempted sexual abuse charge against him and consenting to his ongoing detention.

But, according to nj.com,  his lawyer also told the judge that Herman will appear in court again soon to propose a bail package, hoping to win his release then.

Wearing a yellow jail-issued jumpsuit and appearing thin and tired in court today, Herman said only the word "yes" one time, while answering a question from the judge. Before the hearing, he grew emotional, tearing up, frowning and hunching over at one point as he sat in a courtroom chair. During the hearing, he stood for several minutes behind the defense table and looked composed, even as he remained shackled in handcuffs with a heavy metal chain wrapped around his back.

Herman did not enter a plea at the brief hearing. But Agnifilo made clear to reporters afterwards that Herman considers himself to be not guilty and intends to fight the federal charge against him vigorously.

Dave Herman, the former radio personality from New York’s legendary rock station WNEW-FM who last month was arrested on charges of trying to transport a 7-year-old Bergen County girl to the U.S. Virgin Islands to sexually abuse her, will appear in federal court in Newark today for the first time.

According to nj.com, the 77-year-old Herman was detained by authorities on Oct. 24 at the St. Croix airport, where he’d reportedly shown up with a sutffed animal expecting to meet the girl, has been moved through federal custody from St. Croix to Puerto Rico to Oklahoma and now to New Jersey, in advance of tomorrow’s hearing, said Marc Agnifilo, his New York-based attorney.

Herman will make an initial appearance at 1 p.m. before U.S. Magistrate Judge Mark Falk, Agnifilo said, in what he expects to be a brief hearing that will mostly consist of Falk reading out the formal charge against Herman. He also expects his client to enter a not guilty plea.

Herman, who ruled the rock airwaves at WNEW-FM for years with his calm, smooth demeanor on the famous “Dave Herman Rock and Roll Morning Show,” will not contest tomorrow his ongoing detention, Agnifilo said. 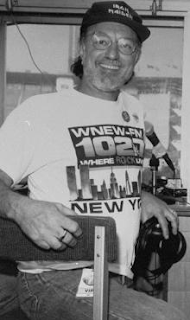 He is currently being held without bail.

But Agnifilo said he will soon sit down with Herman to put together a “substantial,” bail package that he hopes will be approved by the judge in the next two weeks, if not sooner.

Herman, who authorities say has properties in both Airmont, N.Y., and St. Croix, was snared in a computer-investigation headed by an officer from the Bergen County Prosecutor’s Office who chatted with him online, saying she was a 36-year-old single mother from Bergen County with a young daughter named “Lexi,” authorities have said. “Lexi” was the officer’s creation.

As online chats between Herman and the officer continued from 2012 into this year, Herman allegedly tried multiple times to set up meetings with the girl so he could have sex with her, authorities say.

After learning in November 2012 that Lexi was 6 years old, Herman allegedly wrote back that “age 6 is the perfect time to start her being loved that way,” according to the federal complaint filed against him in Newark.

If convicted, Herman faces mandatory minimum sentence of 10 years in prison and a maximum of life, authorities have said.