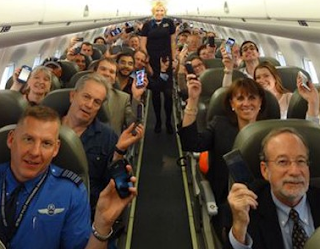 FCC Chairman Tom Wheeler tried Friday to tamp down the backlash against his agency’s proposal to look at relaxing the restrictions on cellphone use on planes — while saying the airlines will make the final call, according to Politico.

“We understand that many passengers would prefer that voice calls not be made on airplanes,” Wheeler said in a statement. “I feel that way myself. Ultimately, if the FCC adopts the proposal in the coming months, it will be airlines’ decisions, in consultation with their customers, as to whether to permit voice calls while airborne.”

Wheeler added that the FCC proposal “recognizes that there is no technical reason to prohibit mobile devices from interfacing with the onboard wireless data systems being installed on many aircraft. … There is nothing in the proposal that prohibits airlines from developing whatever in-flight phone usage policy they may wish.”

But that may not be enough to calm the pushback that began immediately after the FCC announced its proposal Thursday.

On Friday, Sen. Mark Begich (D-Alaska) sent Wheeler a letter urging him to withdraw “this ill-advised proposal.” Among other issues, Begich said he was concerned about the potential for cellphone calls to cause “air rage” among passengers.