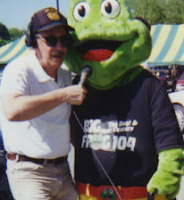 For the first time in its 25-year history, perennial market leader WFRG Big Frog 104 FM is playing “the best and most country” without its longtime morning host.

According to CNYRadio, Matt Herkimer’s bio and photo disappeared from the station website over the weekend, and he’s not on the air this morning.

On the Big Frog 104 website, co-host Polly Wogg is now listed as the sole host of the morning show, but she was joined by afternoon drive host Tad Pole today.

CNYRadio.com also reports Tad Pole will be permanently co-hosting mornings with Polly Wogg, while part-timers will be hosting afternoons for the time being.

The lack of an official farewell for outgoing co-host Matt Herkimer is rather surprising, considering he had been with the station from day one, in 1988, when it started out as 96 Frog. For the first few years, Herkimer was the afternoon host, but eventually moved to mornings.