President Does It On The Radio 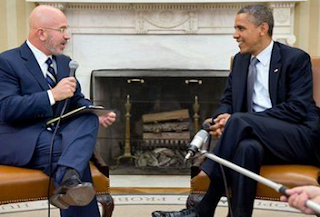 President Obama is off the campaign trail today, but will try to reach voters through their radios -- and MTV.

Obama has a total of ten interviews today, his campaign said; it did not identify all of them, but said seven would be done with media from battleground states.

The president will speak with Philadelphia radio host Michael Smerconish, as well as April Ryan of Urban Radio Networks.