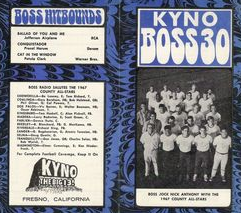 Get ready to shake, rattle and roll.

The new '60s rock 'n' roll format for KYNO (AM 1430) scheduled to launch in mid-November is a return to the musical roots of the radio station according to Rick Bentley at The Fresno Bee.

Launching the format will complete the recent moves by Fat Dawgs Broadcasting and JSA Broadcasting that included the shift of the sports programming off of KFIG at AM 1430 to the 50,000-watt 940 AM.

Those of you who have lived in Fresno since the '60s will recognize the KYNO format. The local radio station, which launched in 1957, became the highest-rated station in Fresno with its new Top-40 programming known as "Boss Radio."

Bill Drake, program director at KYNO 50 years ago, and owner Gene Chenault came up with the idea of taking the 40 hottest songs of the day and playing them repeatedly with limited commercials. Fresno was the testing ground for the format that became so successful, it was adopted at radio stations across the country.