radio morning show personality Kelly Stevens will get married Saturday, two months after surviving a car crash that killed the other driver.

"Don't take life for granted because you literally don't know from second-to-second what God has for you," said Stevens from his wheelchair Friday morning. 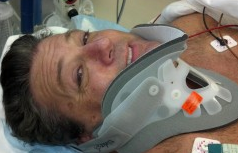 "To this day, I still remember that," said Stevens, fighting tears.

According to CBSatlanta.com, Stevens was not wearing his seatbelt and was slung across the seats as his car flipped.

He was left with a shattered leg and arm, along with two fractured ribs and a vertebra. He spent two weeks at , some of that time in the ICU. He then transferred to a rehabilitation clinic, spending another eight days there.

Stevens said in the days following the crash, he questioned why God had spared his life, but then it hit him why he was given a second chance. He knew he was supposed to propose to his girlfriend of one year, Katie Buser. And propose he did, straight from his hospital bed.