Internet Radio has grown exponentially and so has its audience. More than 42% of the population is listening to Internet Radio, which is up 8% from 2011.

According a a White Paper created by Targetspot, this audience has numerous significant traits:  many are married and have kids, they own their own homes, have high levels of disposable income and they are also highly engaged with Digital Audio content.  In fact, 75% change stations at least one time daily and 64% change websites multiple times a day in order to remain connected with their listening experience. 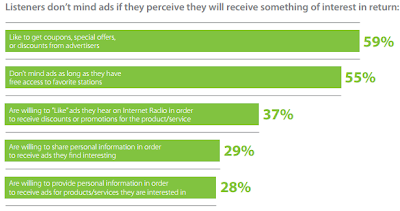 Another key indication of engagement is that these listeners regularly interact with the player – 61% don’t keep the player minimized and 67% often check the player to see the name of a song or artist.

With key metrics such as these, it’s not surprising that this audience’s engagement with content translates to their interaction with Digital Audio advertising.  Given the importance of this major media segment, there is a growing need to understand Digital Audio listeners’ viewpoints on advertising and to leverage these findings to best communicate with them.