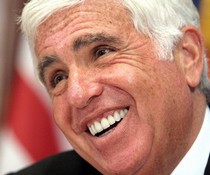 SiriusXM Radio today announced that Mel Karmazin informed its Board of Directors that he will be leaving the Company on February 1, 2013, following the expiration of his current employment agreement and after a transition period.  Mr. Karmazin will also leave the Board of Directors at that time.


Karmazin has been Sirius XM's CEO since 2004. There has been speculation Karmazin would leave the company after an expected takeover by Liberty Media Corp., which is seeking a controlling interest in the satellite radio provider.

Liberty has amassed a 47.3 per cent stake in Sirius XM, and the Federal Communications Commission is currently considering Liberty's proposal to take control of the company.

"SiriusXM is an extraordinary company with an incredible team.  It is an honor to come to work here every day where we truly deliver the best radio on radio.  I am incredibly proud of what we have accomplished.  Given where we started, it is amazing that SiriusXM has grown to become the largest radio company in the world.  With a deep bench of corporate talent, a roster that includes the most in-demand on-air personalities and a wide-range of exclusive programming, SiriusXM has never been better positioned than it is today.  We continue to grow our subscriber base to record levels and our financial position has never been stronger.  Importantly, the commitment to delivering innovative new products and technologies is very strong.  SiriusXM has a strong foundation to build on for the future and there is a great team in place to keep the company moving forward.  I am confident that SiriusXM's best years are ahead," said Karmazin.

"On behalf of the Board of Directors, I want to thank Mel for his significant contributions to the Company," said Eddy Hartenstein, Chairman of the Board of Directors of SiriusXM. "Under his leadership, the Company underwent a transformative merger and a financial restructuring that has enabled SiriusXM to deliver significant value for shareholders.  Our record breaking financial results are a testament to Mel's leadership and strategic planning, and we continue to exceed our expectations with all-time high subscriber numbers.  Thanks to Mel, we are well-positioned for long-term growth and value creation.  We will miss Mel – and the Board wishes him the very best in his future endeavors – SiriusXM has a strong executive team in place and we are very confident in our business and our future prospects."

"We appreciate the tremendous job Mel has done for the Company in overseeing the merger and delivering outstanding operating performance.  While we understand, we regret Mel's decision to pursue other interests and are grateful for his willingness to oversee a smooth and orderly transition," said John Malone, Chairman of Liberty Media Corporation.

The SiriusXM Board of Directors has formed a search committee, chaired by Greg Maffei and including James Mooney and Eddy Hartenstein, to consider both internal and external candidates for the Company's next Chief Executive Officer.
Posted 4:47:00 PM